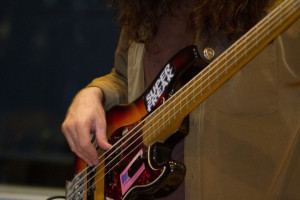 The bass he’s owned the longest is a 1972 Fender Precision Bass in which he had a jazz pickup installed. He’s owned this bass since the 80s. It has Seymour Duncan Vintage P-Bass pickups and a Vintage J-Bass pickup installed. It has a BadAss II bridge and a Hip Shot D-tuner. Right now it is strung with D’Addario half-round strings. This is one of the basses he tunes in fifths.

The bass he’s been using the most recently is a 1986 Fender Precision Bass. He bought it for about $100 at a second-hand shop in Osaka, Japan. He installed Seymour Duncan Vintage P-Bass pickups in it. He’s using Labella Flatwound strings on this bass. It is also tuned in fifths.

The bass Kory uses for more modern sounds is a 1993 Fender Jazz Bass body with a Novax Fanned Fret retrofitted neck. It has a special single-string bridge system to accommodate the fanned frets. This bass has Quarter Pound Jazz Bass pickups from Seymour Duncan. It also has a Hip Shot D-tuner. This bass is strung with Kalium Strings tuned in fifths.

Kory’s fourth electric bass is a Yamaha BB bass tuned in fourths with LaBella Flatwound strings. He uses this bass mainly for teaching.

Kory has two EBS amplifiers. One, his main gigging amp, is an EBS Drome. His other amp is an EBS AC311 active cabinet. Along with these, he uses an EBS MicroBass II preamp, an EBS MultiComp compressor pedal, a BassIQ envelope filter pedal, an OctaBass octave pedal, an Electro-Harmonix Bass Big Muff Pi fuzz pedal. His pedals are all mounted on a Pedal Train pedal board and powered by Voodoo Labs. 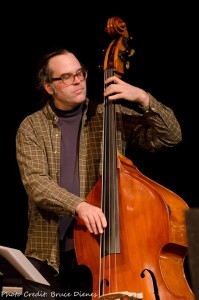 Kory’s upright acoustic bass is of unknown genealogy. The person who sold it to him claimed it was of Austrian origin, built in the 1860s; however, Joel Quarrington, a bass virtuoso and expert in identifying basses, suggested it was built at the turn of the century [late 19th-Century, early 20th-Century] in what is now the Czech Republic. One identifying feature is the extra piece of wood on the bottom, carved to resemble waves. Apparently, it was the custom in Czech for the stage hands to drag the basses on stage.

Kory uses QSC K10 speakers for his main live PA speakers. He uses K8s for monitors. For his live set up, he has two boards that he uses: an analog board and a digital board. The analog board is a SoundCraft 200SR. The digital board is a Yamaha O1V. For outboard gear he uses three 31-band EQs, a four channel DBX 1046 compressor, a Lexicon LXP 15 reverb, an Alesis MicroVerb II effects processor.